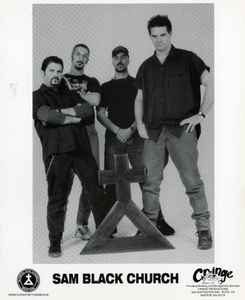 Profile:
Sam Black Church started in Boston in 1988. They played a frenetic blend of hardcore, metal, and thrash that enabled them to share bills with bands as diverse as Bad Brains, Clutch, Motorhead, Cro-Mags, and Helmet. SBC was known for their full-on live performances which in their heyday were second to none for energy and intensity. They were one of the largest heavy bands in the northeast for a period in the mid-90s. They disbanded in 2000, and reunited for a 20th Anniversary show in 2007.