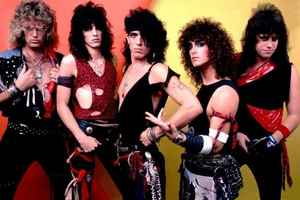 The name Ratt came into being in the beginning of the 1980s, although the band's roots can be traced back to the mid '70s and the band Mickey Ratt, which was fronted by vocalist Stephen Pearcy. By 1983, after cycling through a number of different musicians and relocating to Los Angeles, where they would play a large part in the growing glam scene, the "classic" line-up of Pearcy, guitarists Warren DiMartini and Robbin "King" Crosby, bassist Juan Croucier, and drummer Bobby "Blotz" Blotzer was in place. From 1984 through 1990, the band would record and release 5 commercially successful albums. By the turn of the decade, though, the band's fortunes were declining as popular tastes in music were changing and Crosby, once one of the driving forces in the band, found himself mired in a heroin addiciton that ultimately led to his removal from Ratt. After substituting guitarist Michael Schenker for Crosby for touring purposes, Ratt released what would be the final single of their initial run, "Nobody Rides for Free" (from the soundtrack for the movie "Point Break") in 1991 as a four-piece. The following year, Pearcy and DiMartini left the band, effectively ending Ratt.

In 1997, the members met to discuss the possibility of a reunion. Croucier declined to join and it was decided that Crosby was in no condition to participate (still suffering from drug addiction, the guitarist was severely overweight and HIV positive, a fact he would publicly disclose in 2001; he would die of a heroin overdose the following year). Robbie Crane was brought in to replace Croucier and Pearcy would occasionally handle second guitar duties. This line-up released a self-titled album in 1999 but it did not have the same commercial success as their previous releases. Pearcy left the band the following year and began touring as "Ratt featuring Stephen Pearcy". This led to lawsuit over right to the name "Ratt" between the singer and Blotzer and DiMartini, from which the latter two emerged victorious, although the issue of the rights to the name remains a point of contention for all the surviving members of the classic line-up.

Blotzer and DiMartini would tour throughout the first half of the 2000s under the Ratt banner with several different vocalists and second guitarists before reuniting with Pearcy in 2006. In 2009, the band, with Robbie Crane still playing bass and former Quiet Riot guitarist Carlos Cavazo on board, recorded the well-received LP "Infestation". However, owing to tensions between the members, the band announced that it would be going on indefinite hiatus the following year. In 2012, Crane announced that he was no longer a part of Ratt. Shortly thereafter, it was announced that Juan Croucier had returned to the group. In the spring of 2014, Pearcy announced that he was leaving the band again, citing unresolved personal and business tensions. In the summer of 2015, both Bobby Blotzer and Juan Croucier launched separate touring projects for the purpose of performing Ratt songs, with Blotzer stating the DiMartini refused to participate in any Ratt-related touring unless it included Pearcy and Croucier. In late 2015, the drummer announced that his touring band was now the official version of Ratt. Blotzer brought legal action against Croucier for touring as "Ratt's Juan Croucier" while DiMartini brought action against Blotzer for using the Ratt name. In November 2016, the courts ruled that the Ratt name still belonged to the surviving members of Ratt's original partnership which was created in 1985. With the announcement of this ruling, Pearcy, DiMartini, and Croucier announced that they were reuniting under the Ratt banner and expelled Blotzer from the partnership. In 2018, Pearcy and Croucier announced that they were touring with an entirely new set of musicians, stating that DeMartini expressed a disinterest in participating.
Sites:
therattpack.com, MySpace, Facebook
Aliases:
Mickey Ratt
Members:
Bobby Blotzer, Carlos Cavazo, Chris Hager, David Alford, Jake Williams (5), Jim Wilkinson (4), Joey Cristofanilli, John Corabi, John Turner (3), Juan Croucier, Khurt Maier, Matt Thorne, Robbie Crane, Robbin Crosby, Scott Griffin, Stephen Pearcy, Warren DeMartini
Variations:
Viewing All | Ratt
Rat, Ratt = ラット, ラット