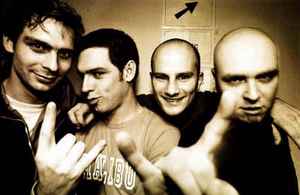 Profile:
Liquido was a German alternative rock band formed in Sinsheim, Germany in 1996 by four friends: Wolle Maier (drums), Wolfgang Schrödl (vocals, guitar, piano), Stefan Schulte-Holthaus (bass) and Tim Eiermann (vocals, guitar). Their only notable international hit, "Narcotic", was first released on a demo in 1996 and sold over 700,000 units when Virgin re-released it in 1998. Since then, Liquido hasn't been able to repeat this success, which led to a split from Virgin after two unsuccessful albums. 2005 saw the release of an equally ill-fated album on the new label Nuclear Blast.