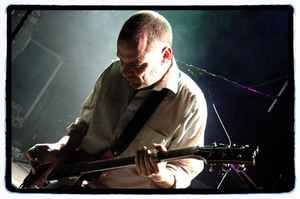 Craig Ward's musical adventures began with his playing banjo and mandolin in the Wufniks, with Norrie McCulloch, around Glasgow's folk club circuit in 1992-93. The band would morph into Dunghose for a European tour in the summer of '93. When Dunghose returned to Glasgow, Ward stayed behind in Antwerp, Belgium, where, in January '94, he formed Superalmendrado (in which he played electric guitar), with Mark Meyers. After a promising start, the band folded after less than a year, Ward returning to Scotland after his working relationship with Meyers had unravelled. Also during '94, Ward recorded a still-unreleased album on 4-track with his friend and long-term collaborator Rudy Trouvé, under the name of Cynthia Appleby & Friends, as well as playing ukulele in Viking Dave Robertson & The New Peruvians of Soul and becoming a lifetime member of Trouvé's ever-expanding neo-No Wave collective, Kiss My Jazz.

On his return to Glasgow he picked up the bass and formed Savalas (again with McCulloch) but left when offered the lead guitar spot in dEUS (returning to Antwerp in August '95 following Trouvé's departure). Ward remained with dEUS until September 2004, when, halfway through the making of Pocket Revolution, he quit - his enthusiasm for dEUS's music and his relationship with band leader Tom Barman both rapidly deteriorating. Toward the end of his dEUS tenure Ward formed The Love Substitutes with Trouvé and Mauro Pawlowski and, shortly afterwards, the revolving-door improvisation collective iH8 Camera, intended to fill the gap left by the demise of Kiss My Jazz. In 2005 he worked again with Mark Meyers, making his drumming debut with Pox. He also formed Donkey Diva with Gunter Nagels of Donkey Diesel and Gregory Frateur of Dez Mona. The trio performed live in Belgium but never recorded.

By 2007 Ward had relocated to Berlin. During this period he began four new groups/collaborations; True Bypass (an acoustic project with Chantal Acda), A Clean Kitchen Is A Happy Kitchen (a skronky, Beefheartian trio), Elton Genocide (an experimental project with Stephan Sander) and Mark Mulholland & Craig Ward (another acoustic project). He also performed with German improvisers Das Huhn, (who, incidentally, collaborated on Ward's contribution to the album 'Pawlowski, Trouvé & Ward,' a split CD for Andrew Bennett and Jerry Lewington's fledgling Jezus Factory label. Ward's relationship with the label continues to this day).

After sabbaticals in Montreal and Los Angeles, Ward returned to Antwerp in the spring of 2009, where he briefly performed live in Donkey Diesel and joined surrealist cabaretier Roy Aernouts for an extensive tour of the Dutch cabaret circuit. A stint in Rotterdam saw him solidify his musical relationship with Mark Mulholland, with the completion of their album, Waiting For The Storm, This period also saw him collaborate with Dutch noise artist Radboud Mens, as well as record his first (ambient) solo album. He currently lives in Argyllshire, Scotland.
In Groups:
A Clean Kitchen Is A Happy Kitchen, Anti Narcotics League, Cynthia Appleby And Friends, dEUS, Kiss My Jazz, Superalmendrado, The Love Substitutes, True Bypass
Variations:
Viewing All | Craig Ward
C Ward, C. Ward, Craig, G. Ward, Griag Ward, Ward, Wardism