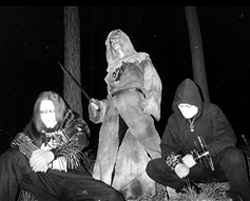 Profile:
Moontower was started as a solo project of Belial in 1993 under the name Funeral Moon. In 1996 rehearsal tape was prepared and Belial decided to change the name to Moontower. Nothing has happened until 1999 when new members joined: Seth (guitar & vocals), Amaimoon (bass & keyboards) & Rafał (as session drummer). Amaimoon & Rafał both left the band in 2002 and after that few recording sessions went with the usage of drum machine, until the full line-up was crystallized in 2005.

The band always underlined in their interviews that their main purpose is to be anti-christian, as the catholic church is a truly disease in Poland.
Members:
Amaimoon, Belial (2), Hellblast (2), Mirosław Miro Rosiński, Necrosolus, S. Storm, Seth (4), Trenhell, Wolfshunger