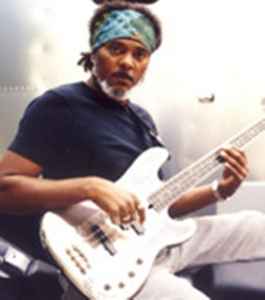 At the beginning of his career, he was mostly on funk albums, later moving to more rock, blues and folk music. Johnson worked as a session musician but also in other roles for many notable artists.
Johnson is well-known for playing with The Neville Brothers, The Rolling Stones, Bob Dylan, Emmylou Harris and his many collaborations with U2 producer Daniel Lanois. Besides his many credits as a performer, Johnson has a variety of writing and arrangement credits; he has worked as a songwriter on seven albums of Neville Brothers, as well as on albums of Emmylou Harris, Black Dub, Daniel Lanois, Ian Moore, and others.
Sites:
Wikipedia
In Groups:
Black Dub, Silverlake Male Chorus
Variations:
Viewing All | Daryl Johnson
-Daryl, D. Johnson, D.Johnson, Darrell "DJ" Johnson, Darrell Johnson, Darryl Johnson, Darryle Johnson, Daryl, Daryl Johndson, Daryll Johnson