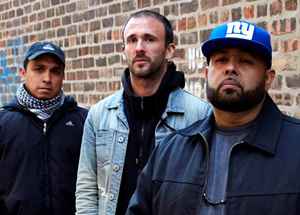 Profile:
Dälek (pronounced dialec) is hip hop outfit from Newark, New Jersey, founded in 1998. Will Brooks (a.k.a. MC Dälek) was responsible for lyrics, Alap Momin (a.k.a. The Oktopus) was the producer.
Hsi-Chang Lin (a.k.a. Still) used to handle turntables, but left Dälek in summer 2005.

For a band so steeped in noise and bombast, Dälek ended quietly, going on hiatus in 2011 without even an official statement. Brooks stresses that there was no beef between he and Momin, just a project that had run its course. Momin moved to Berlin and focused on electronic projects, while Brooks made slightly more traditional rap as iconAclass. Performing classic Dälek tracks live gave Brooks the urge to revive Dälek, and with Okto’s blessing he assembled a new lineup in the spring of 2015 with co-producer Mike Manteca (Destructo Swarmbots) and DJ Rek.
Sites:
deadverse.com, Bandcamp, Facebook, instagram.com
Members:
Alap Momin, DJ Rek, Hsi-Chang Lin, Mike Mare, Will Brooks
Variations:
Viewing All | Dälek
Daelek, Dalek, The Dalek