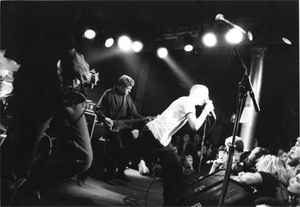 Profile:
Embrace was short-lived band from Washington, DC, who existed from 1985 until 1986. The group consisted of Ian MacKaye (vocals), Chris Bald (bass), Michael Hampton (guitar), and Ivor Hansen (drums). The latter 3 members had previously performed in the Faith (3) which was fronted by Ian's brother, Alec MacKaye. Embrace played a handful of local shows but split just as they were preparing to play some out of town gigs, a result of tensions that dated back to some of the members time in The Faith. In 1987, Dischord Records issued a posthumous LP.
Sites:
Wikipedia, Bandcamp, dischord.com
Members:
Chris Bald, Ian MacKaye, Ivor Hanson, Michael Hampton (3)