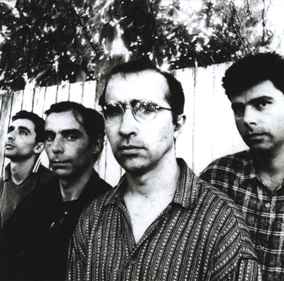 Profile:
Les Thugs are a punk rock (and more) band from France. The band were formed in 1983 in Angers with five members and were soon reduced to four in the same year: Eric Sourice on guitar and lead vocals, Thierry Meanard on guitar, Christophe Sourice on drums, and Gerald Chabaud on bass until 1983. Chabaud was replaced by Pierre-Yves Sourice. Although the band called it quits at the end of the 90s, they briefly reformed in 2008 for the Sub-Pop 20th Anniversary Festival and a short warm-up tour in France.
A mix-up by their recording company meant that the band would resurface, albeit only as the digital information on The Baseballs similarly named Strike album in 2010.
Sites:
lesthugs.fr, MySpace
Members:
Christophe Sourice, Eric Sourice, Gerald Chabaud, Pierre-Yves Sourice, Thierry Meanard
Variations:
Viewing All | Les Thugs
Le Thugs, Les Thugs 1, Les Thugs 2, Les Thugs I, Les Thugs II, The Thugs, Thugs