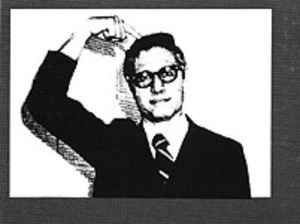 Profile:
Tone Set was a Tempe, Arizona band that existed from circa 1981 to 1983. Members Galen Herod and Greg Horn met while working for KAET, Tempe's Public Broadcasting station.

Their early sound was ostensibly synthetic, mixing very 'clean' synthesizer sounds with tapes. This was the sound of their first release, a 1982 cassette called "Cal's Ranch". It almost completely lacked vocals (the only exception was a line in "Wigglin Around In Middletown"). The tape portions were primarily pieces of dialogue from various recordings. "(Predictions) uses the dialogue from a prime-time local news broadcoast (with anchorman Bill Close) that some nut with a gun took over in, I believe, the fall of '81 ... really surreal stuff."(Dan Bailey) Other pieces were of a more lighthearted nature, like "Time Travellers", which used an extended recording of dialogue from "Rocky and Bullwinkle". The tape was recorded at "The Center for Advanced Studies," a house were both band members lived, and released by Zia Records in Tempe, AZ.

Vocals started to become a more prominent part of their sound by the time they started recording their 1983 LP, "Calibrate". This was also a home studio effort. The first side of the LP featured three pop songs: "Life is Busy," "Slim," which were both were sung by Galen Herod, and "Living In Another Land," which was sung by Greg Horn. The second side of the LP came from the "Cal's Ranch" session. The cover was decorated with pictures cut from an old math book, plus a drawing of "Pegna," a creature that would give Pegna Records its name. "Calibrate" was released in February 1983 as Pegna Records PEG 1.

The duo once performed as "Life Is Busy", opening for Pebble Culture(former Nervous member Bil Bored (Bill Yanok), Kristi Register and George Maestri). "They did the whole set with fake Yugoslavian accents, the highlight being a song called 'Working in a Pencil Factory'. Pretty damned odd." (Dan Bailey) They released a cassette single with "Working in a Pencil Factory."

Tone Set poduced a video for "Life is Busy", from their "Calibrate" MLP, which was shown on "Videobeat" and once on MTV's "Basement Tapes," where, despite the presence of Mark Mothersbaugh (Devo) as one of the judges, was not voted into regular rotation.