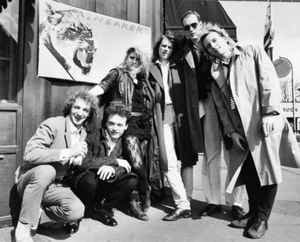 Profile:
Sneakers were one of the most successful pop rock bands from Denmark in the first half of the 1980s.

They were formed in May 1979 by Morten Kærså (keyboards), Jacob Andersen (percussion), Moussa Diallo (bass) Klaus Menzer (drums), and Poul Halberg (guitar), but Halberg left after six months to form Halberg-Larsen and was replaced by Mikkel Nordsø (guitar) in early 1980. Around the same time female vocalist Sanne Salomonsen joined the band and they established themselves as a solid live attraction with Salomonsen as an easily recognizable front figure.

Debut album Sneakers was recorded in July 1980 and became a moderate success upon its release in October. By that time, Diallo had been replaced by Christian Dietl (bass). The second album Sui-Sui, released in September 1981, became the definite breakthrough. The band released two more successful studio albums, Rou'let (November 1984) and Katbeat (April 1984), until they decided to take a break in February 1985.

Sneakers reformed for the "Grøn Koncert" tour of 1998 and for the Ken Gudmand award ceremony in 2012. In parallel, all members have continued in their careers in various constellations, notably Salomonsen as a solo artist and Kærså as leader of Moonjam.
Members:
Christian Dietl, Jacob Andersen, Klaus Menzer, Mikkel Nordsø, Morten Kærså, Moussa Diallo, Poul Halberg, Sanne Salomonsen
Variations:
Viewing All | Sneakers (6)
The Sneakers