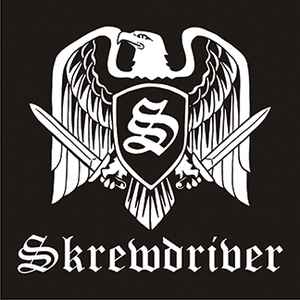 Founded by singer Ian Stuart Donaldson in 1976, the band originally sported a punk look, but, at their label's urging, became skinheads during the second wave of skinheads in England. Skrewdriver became known for attracting violence at their shows and none of their Chiswick releases did very well in the UK charts. They broke up in 1979.

Singer Ian Stuart re-formed the band in 1982 as a clearly White Power neo-Nazi band, with an entirely new, and often revolving lineup. This new version of Skrewdriver became the musical arm of the British National Front and released as their debut album "Hail The New Dawn" in 1984 on the German Rock-O-Rama label. This release not only helped transform the label to a far-right position but effectively invented White Power "hate-rock" and Skrewdriver quickly became a driving force behind the RAC (Rock Against Communism) movement.

dont judge unless you lived it.. being a skin in the 80s and going to their early gigs did not make me a racist i enjoyed oi skinhead music.. i also went to see the clash ,angelic upstarts ,the redskins ,the oppressed so maybe im a anti racist communist.. you can enjoy music without buying into the politics or you can from learn from it..an open mind is......

October 14, 2016
Probably one of the best punk bands from Blackpool ,shame they got into racism ,,,first album was scorching
Reply  See 8 replies Notify me 23 Helpful