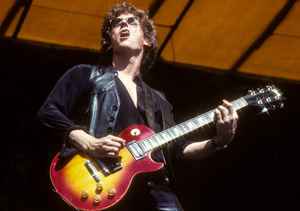 Lanier wrote several songs for Blue Öyster Cult albums, including "True Confessions", "Tenderloin", "Searchin' for Celine", "In Thee" and "Lonely Teardrops". In addition to his work with Blue Oyster Cult, he also contributed to music by Patti Smith, Jim Carroll, The Dictators and The Clash, among others. He dated Patti Smith for several years during the 1970s.
Lanier first performed with the band (then known as Soft White Underbelly) in 1967. He left the group in 1985, and was replaced by Tommy Zvoncheck (of Clarence Clemons and Public Image Ltd fame).
He returned in 1987. He retired from performing with them after the autumn of 2006.

Without any official announcement from Blue Öyster Cult, the band's line-up photograph was updated to remove Allen, and a brief mention on the page for Richie Castellano has the following to say: "Since the retirement of Allen Lanier, Richie has switched over to the guitars/keyboards position, both of which he's quite the master!", which would seem to indicate that Allen Lanier retired from both Blue Öyster Cult and music, in 2007, having played his last concert with them in late 2006. He would rejoin them for their 40th anniversary concert in New York in November 2012, which proved to be his last ever appearance with the band.