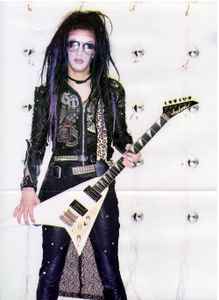 Real Name:
Jeordie White
Profile:
Twiggy Ramirez joined Marilyn Manson in late 1993 during the development of the band's first LP, "Portrait of an American Family." Prior to joining the band, Twiggy and Manson participated in mini project bands including a fake Christian death metal band called "Satan on Fire".

Twiggy eventually parted ways with the band in 2002 due to creative conflicts and was replaced by Tim Skold.

January 2008 it was announced Twiggy Ramirez and Marilyn Manson had reunited and are back together to finish where they left off.