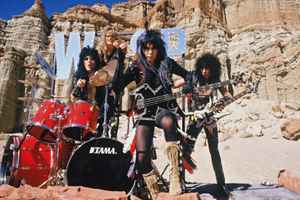 The group's title is an acronym for "We Are Sexual Perverts" as shown in the first press vinyl's runout of their debut album.

The band is led by vocalist/guitarist/songwriter Blackie Lawless. They arose out of Los Angeles's glam metal scene and gained notoriety for their over the top stage shows, which included the band throwing raw meat into the audience, scantily clad women on stage, and Lawless's spark-shooting codpiece.

The band was commercially successful throughout most of the 1980's but also caught the attention of parent's groups, most significantly the PMRC. Lawless continues to record and tour under the W.A.S.P. banner with various line ups.

In the 2000s, he reclaimed the Christian faith of his youth and subsequently began toning down his stage shows and censoring some of the lyrics to some of his older, more explicit songs during live performances.

Can someone tell me if there is an LP pressed of the demo with Rik Fox? And what is it called?

February 13, 2018
@ W.A.S.P. Please re-release your 1984 show on DVD or Blu-Ray. I want to enjoy the beautiful par-can lighting and Bill Tracy style stage set on my TV. Thank you sirs. You were one of the better bands of the time. I'm shocked there is such a lack of video footage where as Iron Maiden has too much video footage.
See 1 reply

April 18, 2017
Do none of the debut albums have Animal on them? I swore that song was from their first album...

November 29, 2013
What are the live albums doing in the Albums section like Live... In The Raw, Double Live Assassins and The Sting, they need to be placed in an other section
See 2 replies