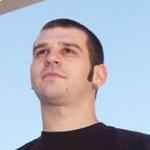 Real Name:
Antonin Barre
Profile:
Born in 1976 in Revel (France). He lived 3 years in Africa (Burkina Faso). After finishing high school, he started studying economy, then computer engineering but only finished his sound engineering school in Switzerland where he actually lives. He first got involved in the electronic music movement in southern France in the early 90s. He is a free-lance sound engineer and works for Swiss French-speaking national radio.
Active as a live-act since 1996, he plays in more than 40 events (single events, clubs, festivals, etc.) His concept revolves between a mix and an improvised performance. He has prepared loops and sound for each track on two portable computers and a couple of synthesizers, along with real-time effects, filter, etc. However, nothing is fixed as he construct the track differently each time and freely choose the next track which he mixes in, as a DJ would, while still being able to modify almost anything in real time, allowing a lot of flexibility. The purpose is to be able to be in tune with the crowd as much as possible during a show.
His sound is influenced by electro, techno and tech house, deep house, underground disco, funk and new wave, jazz, African tribal sounds and rhythms. There is often in his tracks catchy melodies, sometimes mean, melancholic or new-wave alike, perfect contrast with the dynamism and the raging efficiency of the rhythm parts. Resumed by this philosophy “food for the body and the soul”
Sites:
Facebook, mixcloud.com, MySpace, SoundCloud
Aliases:
Antonin Barre, Soulshift
Variations:
Viewing All | Southsoniks
South Soniks, Southsonics