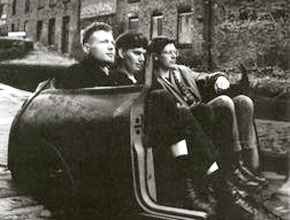 Hailing from the Stockport suburb of Hazel Grove, A Witness, with their Northern Surrealist lyrics and angular, spiky sound, were one of the most individual bands in the 1980's Manchester indie scene.
Formed in 1982, their initial line-up comprised Aitken, Hunt, Curtis and Kilbride, along with a brutally primitive drum machine. When Kilbride left (eventually to end up in AC Temple), they continued as a trio for their initial recordings, which showcased their atonal aggression but also their more otherworldly soundscapes and unexpected melodic interludes.
Following the break-up of Big Flame, Brown joined as a human replacement for the drum machine, this line-up recording the final two of their four John Peel sessions and an EP, before he moved on, being replaced by Tristan King (formerly of Bogshed).
Their next recordings, made with Chris Nagle (who had engineered Joy Division), featured a smoother sound and they were preparing for a high-profile tour with The Wedding Present when Aitken was tragically killed while rock climbing in Scotland (11 October 1989, aged 33 years) and A Witness were no more. The thorough compilation album 'Threaphurst Lane', released in 2000, is named after a road leading to Aitken's house.
Curtis played with The Membranes and Goldblade, and Brown with The Great Leap Forward before ultimately joining up once more with Hunt in the band Marshall Smith.
Sites:
Wikipedia
Members:
Alan Brown (4), Keith Curtis, Rick Aitken, Tristan King, Vince Hunt
Variations:
Viewing All | A Witness
A-Witness, Witness