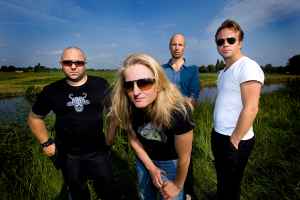 KONG are notable for their use of "Quadraphony" whilst performing live, where each individual bandmember performs on individual stages with independent P.A. stacks in each corner of each respective venue to create a "three dimensional" and "moving" sound-scape.

In 1999 the group decided to go on hiatus, leaving the future of the band unclear. Seven years later bassist Mark Drillich expressed interest in reviving the project, he was eventually joined by new members Tijs Keverkamp (guitar), Mandy Hopman (drums) and David Kox (guitar). This lineup yielded the album What It Seems Is What You Get and directly after its release KONG began touring and performing live once more.