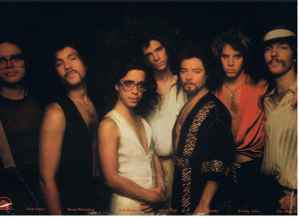 Profile:
Rubicon was a California one-hit wonder funk rock band, whose "I'm Gonna Take Care of Everything" spent 11 weeks on the Billboard Hot 100 in 1978, peaking at #28.

Rubicon was formed in San Francisco by Jerry Martini, who was an original member of Sly & the Family Stone. Other members of the group included Greg Eckler (vocals, drums), Brad Gillis (guitar), Max Haskett (lead vocals, horns), Dennis Marcellino (sax, vocals), Jim Pugh (keyboards) and Jack Blades (bass). Their first album, the self-titled Rubicon, released in 1978, generated their only chart single. They released a second album in 1979, entitled America Dreams, before disbanding. Brad Gillis and Jack Blades went on to form Night Ranger, which would go on to great success in its own right.

January 8, 2014
If you're a fan of American boogie/white funk then these guys are really worth a listen.Slick,tight and lots of fun.