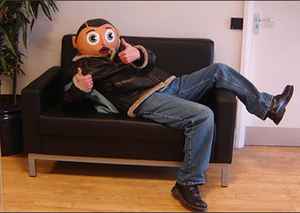 Real Name:
Chris Sievey
Profile:
Frank Sidebottom was the comic persona of Chris Sievey created in 1984 as a mascot for The Freshies. Following the group's break up that same year, Sievey began to perform as Frank alone. In 1985, Frank was signed to Regal Zonophone Records, on which he released three EPs, before moving onto a variety of his own independent labels. Two years later he released his first album 'Fantastic Tales' through his 11:37 Label. Throughout his career he only released five albums.