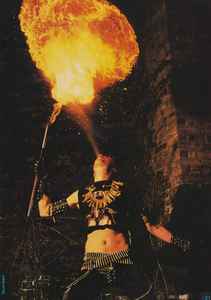 Quorthon is the stage name of Swedish black metal musician Tomas Forsberg (2), who was behind the band Bathory from 1983 to 2004. He stated that the name Quorthon was from a list of so-called demons he found in a book on Satanic rituals, which he thought was utterly stupid, but liked the name. He also stated that the names Vvornth and Kothaar are from the same list of demons, and that he couldn't quite remember whether the names were spelled exactly like that in the book. The book in question is Musta Magia I (1974, translated in Swedish as Svart Magi del I) by Finnish occultist, neo-Nazi and self-proclaimed Reichsführer Pekka Siitoin.

He is the son of Börje Forsberg also known as Boss (2) from Black Mark Production, and according to the magazine Swedenrock, Quorthon is the older brother of Jennie Tebler.

Quorthon was extremely sneaky about his real name, and it's not entirely clear why. In interviews, he would create false names to amuse himself, and see how easily rumors spread in the media. Some have made the obvious claim that he was just concealing ties to his family in the music business. In the archives of his cemetery Sandsborgskyrkogården, his real name is Ace Thomas Börje Forsberg, and the date of death is June 6, 2004.
Sites:
Wikipedia, svenskagravar.se, Facebook
Aliases:
Ace Spunky Black Spade, Black Mark, Tomas Forsberg (2)
Variations:
Viewing All | Quorthon
Quarthon, Quorthon / Bathory, Quorthon Seth, Quorthon for Bathory, Quorthorn, Quorton, Seth Quorthon