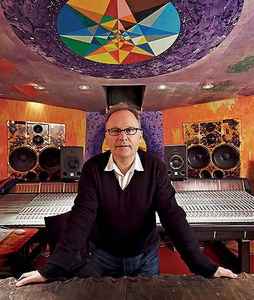 Real Name:
Philip James Harding
Profile:
Please use the Phil Harding & Ian Curnow entry when applicable.
UK engineer, producer, songwriter, musician and author. Born 1957. He started his career in 1973 at Marquee Studios as Tape-Op and by 1979 as engineer, then from 1984 at PWL Studios as chief engineer and from 1992 at The Strong Room. Collaborated on a regular basis with production partner Ian Curnow since 1986. In 1990 he, Julian Wiggins & Simon Dalton (2) formed the production team/company PJS (2)/PJS Music (2).

Harding became a regular speaker and guest lecturer at universities and colleges around the UK and Chairman of Joint Audio and Media Education Services (JAMES), the educational representative body of the MPG (Music Producers Guild) and the APRS (Association of Professional Recording Services). Harding who has a studio in Suffolk, UK has published a book of his times at PWL's 'Hit Factory' and released an accompanying CD, Club Mixes Of The 80s.

March 19, 2020
A Song for Europe Was Broadcast On 9 April 1993, Sequence And Winning Reprise Was Presented Live By Terry Wogan And Sonia Performed All Eight Songs, Which Were Presented During Four Ten-Minute Preview Programmes Broadcast Weekly On BBC1 Between 14 March and 4 April, Several Were in a Uptempo Style Popularised By The Liverpudlian Singer,

The Contest Opened With "A Little Love" Written By Ian Curnow, Phil Harding And Shaun Imrei. This Was Perhaps The Most 'Eurovision' Sounding Entry, Imrei Was Also Responsible For "I'm Gonna Put a Spell on You", Also a uptempo but considerably weaker Than The Opening Song, With 55,053 Tele Votes And Placed 4th Drawed 1st, "I'm Gonna Put a Spell on You Tele Votes 27,795, Placed 6th Drawed 2nd
Reply Notify me Helpful