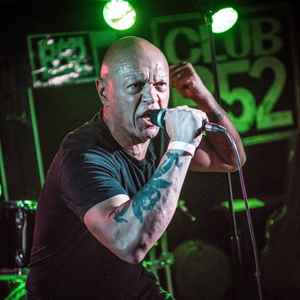 Profile:
Morgan, although born in London started his career in Manchester as a drummer. Illustration, his first band appeared on the Some Bizarre Album with the song he co-wrote "Tidal Flow".

This compilation was to also feature the first recordings by the likes of, Depeche Mode, Soft Cell, Blancmange and The The. At this period he worked with producers such as Martin Hannett in Strawberry Studios, Stockport and Mike Hedges at his Playground Studios in Camden Town...

After a few years honing his musical skills Morgan moved to Chicago in the late 80's, where he got together with Marshall Jefferson, the godfather of house and house diva Kym Mazelle for the writing of her first album.

Back in Europe a year later he joined Manic MC's and co wrote "Mental" a UK club smash and remixed Gwen Guthrie's "Ain't Nothin' Going On But The Rent"! Then in 1990, Morgan teamed up with the classic Swedish house label Btech for a number of underground projects such as Technoir, Control E and Al-Hambra, whose releases are collectors items today.

In 1990, Jan Ekholm asked him to join Clubland along with vocalist Zemya Hamilton. Their debut singe "Let's Get Busy" (remixed by Snap) became a worldwide hit, including No 1 in the Billboard Club Chart.

The success was followed up by the hits "Hold On", "Love Strain", "Set Me Free" and "Hypnotized" who all got to the same number one position in the US and established Clubland all over the world. The band worked with many of the top producers at the time including David Morales, Steve "Silk" Hurley, E-Smoove, Eric Kupper, StoneBridge and George Morel.

Inbetween Clubland, Morgan found the time to release his first solo effort; the timeless club classic "I'm Free", hammered by every DJ around the globe, and also the classic "Take Me Up" by Soundsource - an end of the night anthem played by the likes of Andrew Weatherall and sampled by an endless number of acts throughout the years, including Lock 'n' Load for thier top 10 hit "Blow ya Mind".

Morgan also wrote and produced two tracks on the first volume of the successful Cafe Del Mar compilation series "Agua" and "On the Rocks, plus picked up a Grammy Award for "Best Dance Act".

Of late Morgan has been writing and producing music which has featured on BBC, ITV, Films and most cabel networks, with plans in the process to open a music library.