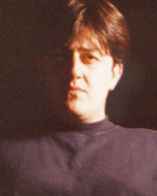 Larger than life Declan began DJ'ing in 1992. A year later, he became resident at United Dance playing the Hardcore scene's toughest Dancefloor killer anthems, alongside those like Slipmatt and Vibes as well as owning Vinyl Rhythm record shop in Chelmsford, Essex which he set up in '93. In 1994, he started to collect studio equipment, and through watching other producers, such as Ruff Driverz' Bradley Carter, he slowly taught himself how to use his new toys. He was also employed with Mo's Music Machine.

Nowadays, Declan is experimenting in the production of Drum 'n' Bass, Garage and R&B, but ravers will best know him for some of his past tunes, such as "Revelation" and "Influence". He has also worked with many other producers, such as Helix, Luna-C (Kniteforce), A-Sides and Ellis Dee and finds himself creating riffs and sounds based around Soul and R&B from the mid to late 80's.

Declan has spread his mixing wings to give pleasure to ravers in Los Angeles, Germany, Denmark, Australia and Canada, as well as Scotland, Ireland and Wales and UK raves: Dreamscape, Fusion, Helter Skelter, World Dance, Labrynth and of course, United Dance