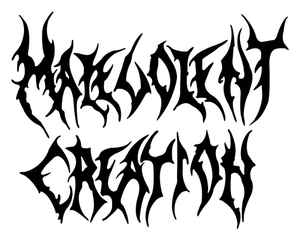 Profile:
Malevolent Creation was formed in 1987 in Buffalo, New York by Bret Hoffmann (vocals), Phil Fasciana (guitar) and Jeff Juszkiewicz (guitar). During their first years they made two demos and in 1991 their first full-length album, "The Ten Commandments", was released by Roadrunner Records. It was followed by "Retribution" in 1992 and "Stillborn" in 1993. After the release they parted ways with Roadrunner Records.

The band was then signed to Pavement Music and shortly after Bret Hoffmann left the band but was replaced by current bass player Jason Blachowicz. The band also acquired a new member, Dave Culross (drums) of Suffocation. In 1995 "Eternal" was released and followed by "Joe Black" in 1996 which contained remixes, outtakes and demos. The drummer was replaced by Larry Hawke, who in 1997 died in a house fire. He was then replaced by Derek Roddy. "In Cold Blood" was released same year.

In 1998 vocalist Bret Hoffmann and Dave Culross returned and "The Fine Art of Murder" was recorded and released. In 2000 "Manifestation" was released and followed by "Envenomed". The band released "The Will to Kill" in 2002 which featured new vocalist Kyle Symons. In 2004 "Warkult" was released.