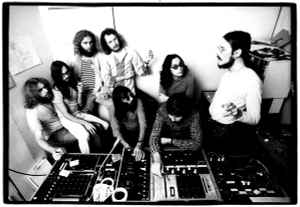 German for "fist", and also the protagonist of Goethe's eponymous play, Faust were one of the first bands to use the recording studio as an instrument. After two albums for Polydor, they signed with the fledgling Virgin label. Priced as a single, "The Faust Tapes" album sold a staggering 50,000 + copies - amazing since it is one amazingly weird pastiche. Their live appearances were explosive (literally), as the pinball machines and jack-hammer legends detail. The band carried on for nearly two years after "IV", however that album, recorded outside the Wümme studio, was their last. Faust came back in 1995 with a new series of albums and live appearances.
Sites:
faust-news.blogspot.com, faust-pages.com, MySpace, Wikipedia
Members:
Arnulf Meifert, Cathy Heyden, Gunther Wüsthoff, Hans Joachim Irmler, Jean-Hervé Peron, Lars Paukstat, Michael Stoll, Peter Blegvad, Pierre Chevalier, Rudolf Sosna, Steven Wray Lobdell, Thomas E. Martin, Uli Trepte, Werner Diermaier
Variations:
Viewing All | Faust
Faust & Friends, Faust And Children, The Faust

July 22, 2022
Why isn't there a listing for Faust V cassette from Virgin Records? it should be documented!

March 12, 2019
There is barely a single release that is not worth owning (though I'm not a fan of 'Freispiel'. the remix album). They are, along with Neu!, Can, and Cluster, my favourite so-called Krautrock band. I had the great good fortune to see them in about '73 when they toured the UK with Henry Cow - what a fantastic gig; it would still sound ahead of it's time now. They took the stage in virtual darkness with a bank of televisions tuned to static and a pinball machine that various members played from time to time. I wish I had a film of that night, it was magnifcent, For years I had the poster on my wll; it was huge and beutifully lettered with the bands names spelt out in letters made up of tiny drawings of animals, I so wish I still had that. The Faust Tapes (49p from Virgin) and the first transparent LP were my introduction, neither have aged at all, they are beyond time and space and utterly relevant right now. I'm interested in the two current bands - do they exist in harmony, or is there animosity? I saw, and have a wonderful tape of, Hans Joachim Irmler plaing with Jaki Liebzeit in Brighton UK a couple of years ago, quite minimalist but a fabulous night - very different from the full on assault witnessed in the early 70s but just as compelling. Long may they run.
See 3 replies

September 2, 2014
The greatest of the '70s German bands. Well - it's between Faust and Can in my opinion. Faust were more ground-breaking in their utilisation of the studio mixing desk as an instrument (whereas Can were more of a psychedelic jamming band with Holger as master of the edit).
The first seven Faust albums, as listed on this page, are their greatest works. The first four are stone avant classics with many hummable melodies plus tons of wit and invention that make the records timeless works of art (yes! art!)
The album with Tony Conrad is a minimalist masterpiece. 'Munic & Elsewhere' and 'The Last LP' contain unreleased tracks (unreleased at the time they were recorded that is) and are totally essential (The Last LP being what would have been their 3rd album for Virgin 'Faust Party').
After this golden period - the beautiful flowering of 1970s Faust - the band disappeared until their reformation in the early 1990s. Things weren't the same though (how could they be?) and the band seemed to dwell on the cement-drilling aspect of their music at the expense of the melodic and whimsical side.
I got to see them at the Queen Elizabeth Hall in London in 1994 (immortalised on the 'Tony Conrad & Faust Outside the Dream Syndicate - Alive' album on Table Of the Elements) which was a real mind f**k. It's a much harsher version than the original 1973 album. I like the Edinburgh 1997 album as well.
It's gotten more complicated since 2004 with two versions of the band - both containing original members. I'm not too qualified to speak about the music. I have most of it - but compared to the original 1970s output - well, it's not so good imo.
Live they can still be good I hear.

January 22, 2004
FAUST were the first to ever release a clear visible vinyl . That was more amazing , since that first album by this group had a Röntgen-ray-picture of a hand with a fist (faust in german) packed together with the clear vinyl into one visible plastic-cover . That efect was indeed mindblowing . As soon as i saw that one , i had to own it , reagrdless what was recorded on it . In fact it was typical Kraut-Rock in the vein of XHOl-Caravan , early Amon Düül or Kraftwerk . Hardly any music on it , but one nice tune with a young hippy woman saying "Möhren , ich mag Möhren" ( from "Steig Auf Die Leiter") , influenced by Pink Floyds "Marmelade , I like marmelade" on Meddle .
Of course i sold this rubbish a couple years later (to my regret now) . Since i would probably get a fortune for it as it was the first pressing i bought around 1971/early 72 . I never was into collecting stamps ,or paying 10 times the price for a record (often in less good shape or sound) with the 'right number' on it . After all it is the music that counts and unless you actually own the masters you always have a duplicate and not the original . But this is something a lot of us will disagree about .
See 4 replies