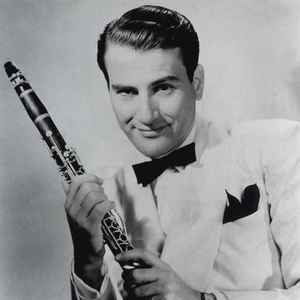 His first public appearance leading his own band was in his native New York City on the 24th of May, 1936 and he became one of the biggest names in jazz and popular music during the late 1930's and 1940's swing heyday. He last toured as a performing clarinetist with a big band in 1950, and made his last live / public performing appearances with a small group in 1954. Shaw made his last records of new material (on which he was merely conducting and not playing) in 1955. He spent much of the second half of his life devoted to writing and other pursuits, although he returned to the recording studios in 1968 to conduct an album of some of his biggest instrumental hits (from 1938-39) with a band that was filled by other notable veteran sidemen of the Swing Era, some of whom had worked for him three decades earlier and were at the time still working professional musicians in their prime. In 1983 he surprised the music world once again by assembling a 16-piece touring big band under the direction of clarinetist Dick Johnson (3) and Shaw appeared with it through 1986-87, at which time he turned the band over to Johnson once and for all. The anti-nostalgic Shaw explicitly stated that he wanted this last band to focus on jazz and lesser known later works from 1944-45 and especially 1949, as well as new material written for the band, much of which was never recorded. He was married eight times including to Lana Turner (1940) and Ava Gardner (1945-46).
Sites:
Wikipedia, imdb.com, bigbandlibrary.com, britannica.com, arts.gov, swingfever.it, swingmusic.net, colorado.edu, scaruffi.com, adp.library.ucsb.edu, npr.org
In Groups:
Art Shaw And His New Music, Artie Shaw And His Gramercy Five, Artie Shaw And His New Music String Quartet, Artie Shaw And His Orchestra, Artie Shaw And His Rhythm Makers, Artie Shaw And His Strings And Woodwinds, Artie Shaw's Band, Billie Holiday And Her Orchestra, Bunny Berigan And His Boys, Bunny Berigan's Rhythm-Makers, Frankie Trumbauer And His Orchestra, The Instrumentalists, Wingy Manone & His Orchestra
Variations:
Viewing All | Artie Shaw
A Shaw, A. Shaw, A.S., A.Show, Art Shaw, Arti Shaw, Artie Show, Artie Slow, Artie-Shaw, G. M. Shaw, Shaw, Shaw Artie, А. Шоу, Арти Шоу