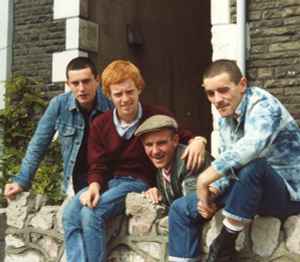 Profile:
One of the first skinhead bands in Europe with strong anti-fascist message coming from Cardiff, Wales, UK. Start in 1981, splitt in 1984. Then reformed in 1994.

"THE OPPRESSED Oi! STORY. 1981 / 202?.
Oi! STORY - THE 80s.
March 1981, Russel (DUCKY) Payne is released from Borstal and I get released from Prison. At the time we didn't know each other and it's just coincidence that we were both banged up for violence. Anyway, Ducky (GUITAR), his brother Ronnie (BASS) and Gary Tier (DRUMS), all Cardiff Skins, along with Martin Brennan (VOCALS) a valley Skin, form an Oi! band. After tossing a few names around, including FORCED OPPRESSION, they decide that THE OPPRESSED fits the bill. So it was that with not much ability and a ton of enthusiasm the boys set out to have a ball. While all this was going on I was forming INSANITY SQUAD with me on guitar, my brother Dom on bass, his mate Vince King on vocals, and a nutter called Ed Flemming on drums. Me and Vince was Skins and Dom and Ed was Punks so that made us Cardiffs first Skunk band. We played a few local gigs, recorded nothing and fell apart after trying play a gig so pissed we couldn't see straight. Back at Duckys house Ronnie had left the band. No big story, he just wasn't into it. Looking for a new bass player they ask my mate if he wanted to join but he couldn't play a triangle so he suggested me. I'd seen their first gig and I remember telling my missus how "I should be in that band". So Ducky, Gary and Brennan eventually turn up on my doorstep and make me an offer I couldn't refuse. I suggested Dom on Bass with me as second Guitarist and the boys were all happy. This was around Xmas 1981 and this line up lasted about a year. Brennan and Gary had decided to leave so I took over vocals and we found the Kid, Lee Jenkins, to take care of drumming. Lee was from Risca, about 20 miles out of Cardiff, a 16 year old Skin who told me "I'm fucking brilliant" when I asked him if he was any good, and "course I have, that's why I'm fucking brilliant" to "got a kit?" This line up lasted about 2 years and recorded nearly everything issued in the eighties. Almost all our gigs ended in a ruck (boys will be boys) and eventually we just got pissed off with whole thing. We did get together in the studio with Juan Garcia, a punk from near Cardiff on drums. We recorded 3 cover versions but played no gigs. So that was it for the eighties. Less than 4 years but it seemed like a lifetime......
Oi! STORY - THE 90s.
After the split in '84, I spent the next 6 years setting up and running my Oi! Records and Ska Records labels, helped to establish S.H.A.R.P and in 1987/8 I put together The Rude Boys with my brothers Dom and Adrian (R.I.P), and 3 sax players. By the end of the eighties the Rude Boys had fallen apart and the labels were struggling. There was a baby (THE Oi! BOY) on the way so I give up on music and got a job. I put The Oppressed back together in 1994 after some Fascist shite had been putting up C'18 (Ni**ers Out) stickers in my area. I tore off the stickers and thought "fuck this" and set out to use the bands profile to Fight Fascism again. For the next 2 years me, Dom and Adrian recorded some Anti-Fascist records including the benefit E-P "FUCK FASCISM". We played a few local "Shows for the Boys" including our farewell gig with the Warriors which was filmed for the THEY THINK IT'S ALL OVER - IT IS NOW video. Although this was our farewell gig we received an offer we couldn't refuse, to play the Camden Irish Center for ANTI-FASCIST ACTION (Oct' 5th 1996).The Business had a gig wrecked by C'18 because they wouldn't have C'18 provide security. The Fascists then announced that no Oi! bands could play London without C'18 security. The lads from A-F-A said "FUCK THAT" and arranged a concert for us. Floyd was now in the band on guitar and this was his one and only gig with us. The Stage Bottles had come from Germany to support us. It was a top night. Just like back in '81, no trouble at all. It was one of our best gigs and, not surprisingly, C'18 became invisible men. 1998 saw us back together with a new drummer (YAN) to do some more recording and we've done nothing since....
Now it's 2004 and we're back in rehearsals. The latest line up is still me, Dom and Floyd, with Tony Kizmus (ex-Societys Rejects) on drums.. If it all goes well we'll be back for the odd festival later in the year.
Oi! STORY - THE 00s
Since writing this we spent 2005 playing all over Europe and did one night in Canada for the Insurgence Records boys which was filmed for the Brotherhood DVD with The Prowlers. I hit 50 in 2006 and decided it was a good time to close the book on the band.
Now it's 2010 and we're back for another load of gigs....
So now it’s 2016 and after playing all around the world it’s time to call it a day. Problems with my health and hitting 60 contributed to the decision but I look back with pride....
It’s now 2020 and at the grand old age of 63 I’ve put the band back together. This time Ducky’s back on guitar. After a 36 year break it’s great to have him back in the band he started 39 years ago. The 2 new boys are Che on drums and Ross on bass. Both boys are from Bridgend and also play in South Wales Punk band The Evil Turkeys. They’re great lads with a wicked sense of humour and fitted right in.
Cheers one and all.
It’s been emotional.
Roddy Moreno"
Taken from bands FB page
Sites:
Facebook, Wikipedia
Members:
Adrian Moreno, Dom Moreno, Ducky (3), Paul Cobley, Roddy Moreno, Steve Floyd (2), Tony Kizmus
Variations:
Viewing All | The Oppressed
Oppressed, The Oppressed!