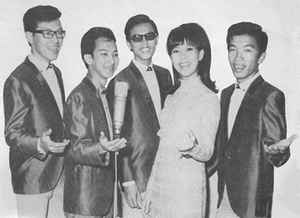 Profile:
The Crescendos were a popular Singapore band of the 1960s. Formed in 1963 and comprising Susan Lim, John Chee, Leslie Chia, Raymond Ho, the band was the first Singapore group ever to be signed by an international record label. The band scored several hits with songs such as Mr Twister and The Boy Next Door. The Crescendos took a break from recording in 1966 and never regrouped after the death of lead singer Susan Lim in 1970.

Early years
The Crescendos started out as a singing group comprising John Chee, Leslie Chia and Raymond Ho. In 1961, they took part in Radio Malaya Talentime, a successful programme that showcased good singers and musicians. For the Talentime contest the following year, the group decided to introduce a female lead vocalist, Susan Lim, a friend of Chia’s sister. Lim was 14 years old at the time and a student at Raffles Girls’ School.

Although The Crescendos eventually took second place on Talentime that year, the band signed a contract with record company Philips International even before reaching the competition finals, making it the first Singapore group ever to sign on with an international record label.

The band was later joined by Israel Lim on bass guitar and Peter Soh on drums, enabling the band to perform onstage as a complete musical line-up.

Recordings
In 1963, the band released its first single, a cover version of Mr Twister. The single was an instant hit and sold more than 10,000 copies in Malaysia, placing it on the Philips World Top Ten list and locally outselling even American pop singer Connie Francis’s version of the song.

The band’s next two singles, In Good Old Summertime and the original composition The Boy Next Door, similarly entered the Philips World Top Ten list. Both singles sold more than 10,000 copies each.

Other memorable songs followed, among these Everybody Loves A Lover, Silver Threads And Golden Needles and Has Anybody Seen My Boyfriend. The band also demonstrated its versatility by recording Malay songs such as Lenggang Kangkong and Waktu Fajar, and the traditional Indonesian favourite Bengawan Solo.

In 1966, at the height of their popularity, the band decided to take a break from recording while Lim pursued studies in political science and sociology at the University of Singapore. During this period, Lim released a solo record with The Thunderbirds, another popular local band.

In 1995, Polygram issued a compilation of Crescendos music titled The Complete Crescendos. In 2002, Universal Music released Treasures From The Past, a compilation featuring The Crescendos as one of the four most prominent bands of the 1960s.

Death of Susan Lim
In 1970, Susan Lim was 22 years old and engaged to be married to John Chan York Lee. After completing her final university examinations, Lim went on a holiday to Malaysia with her fiance and some friends and relatives. On 8 February 1970, while at a beach in Kemaman, Terengganu, Lim was swept away by strong waves despite attempts by her fiance to hold on to her. The body of Lau Kheng Khuang, another member of the party killed in the accident, was recovered, but Lim’s body was never found. Shortly after the accident, the National University of Singapore awarded Lim a Bachelor of Arts honours degree in absentia.

Unlike other bands of the 1960s that reunited over the years for nostalgia and charity events, the Crescendos never regrouped as they felt that Lim could not be replaced.