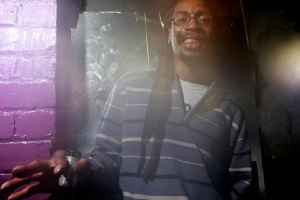 Robert Gordon cut his teeth in the local FON studio working with Mark Brydon as FON Force, and also engineering, editing and producing artists such as Krush, Age Of Chance and Pop Will Eat Itself.
His time came in 1989 when he helped found Warp Records with Steve Beckett and Rob Mitchell (7), through which he released his debut (along with Sean Maher and Winston Hazel) as Forgemasters, "Track with No Name". Through his A&R and production work, he influenced the sound of the label for its first few releases. He also collaborated with several artists, particularly on the Network label, to shape the "Bass and Bleep" sound that combined the techno sound of Detroit with electro and a new, uniquely British experimental minimalism.

In 1996 he surfaced on David Moufang's Source imprint, releasing a solo single (as Black Knight), a full length LP, and an EP co-produced with David Moufang (Move D) himself, as "View To View". A full-length collaboration with Pete Namlook, Ozoona, also appeared on the latter's Fax label that same year.