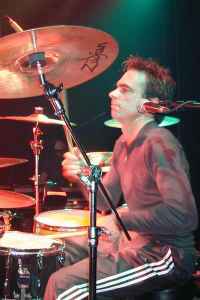 Profile:
Engineer at Red Room Recorders
Recording engineer, producer and drummer. Mark has an extensive touring, performing and studio recording background. After leaving Autodrive in the early 1990s Mark began working as a recording engineer for Morrisound Recording Studio in Tampa. Since then, he has earned a reputation for his work- as an engineer, drummer, and producer. He has recently toured with Sebastian Bach of Skid Row. He has also toured and performed with former White Lion front man, Mike Tramp and Scottish neo-prog legend Fish.

Mark is a sought-after session drummer and has performed on many album, commercial, and demo projects. In addition to his work as a musician, Mark has received producer credit for a long list of bands albums, including Tampa based death metal band, Obituary. Mark is legendary in the Tampa music scene and is known as one of the areas top recording engineers.