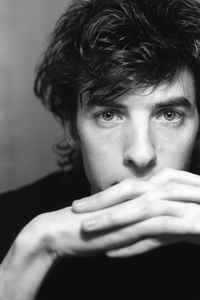 Real Name:
Francis John (Frank) Tovey
Profile:
Fad Gadget (Frank Tovey, born 8 September 1956, London) was the first artist signed to Mute Records. His groundbreaking 'Back To Nature' was released as Mute's second single, in October 1979. His live shows were known for being far more physical than those of many other electronic acts of the time, often featuring Tovey injuring himself. Following the album Gag in 1984, he dropped the stage name and in favour of his real name. The release of The Best of Fad Gadget in 2001 and his supporting Depeche Mode on their Exciter Tour looked set to help his relaunch as Fad Gadget, but he died, aged 45, of a heart attack on 3 April 2002, at his home in London.
Sites:
fadgadget.co.uk, franktovey.de, Wikipedia
Aliases:
Frank Tovey
Variations:
Viewing All | Fad Gadget
F Gadget, F. Gadget, F.Gadget, Fat Gadget, Gadget

February 28, 2003
Fad Gadget, or Frank Tovey - which was his real name (born 1956 in London’s East End), was one of the groundbreaking artists in the electronic genre in the late 70’s/early 80’s.
He was the first signing on Mute Records, where he worked together with e.g. Daniel Miller and John Fryer.
Fad Gadget was known as an eccentric wild man live on stage, as he performed in weird outfits and often ending the shows by injuring himself (he once broke both his legs in a concert in Amsterdam).

Musical highlights were his two first singles "Back To Nature" (released in 1979) and "Ricky’s Hand" (1980), his debut album "Fireside Favourites" (1980) which is truly groundbreaking, and "Under The Flag" (1982), by many considered as his best album and has the great tunes "For Whom The Bells Toll" and "Love Parasite" on it.
Worth mentioning is also his collaboration with the German industrial band Einstürzende Neubauten that resulted in the brilliant song "Collapsing New People" in 1984.

In 1985 Tovey dropped the Fad Gadget name, and started to release records under his real name. Unfortunately he passed away in 2001, because of a heart failure.