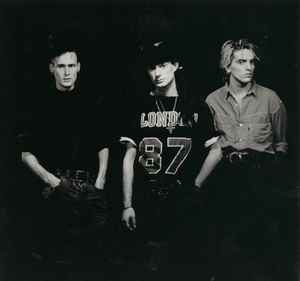 Profile:
Renegade Soundwave - pioneering & influential electronic music group. Early use of sampling and computer technology, DJ skills, sub-bass exploration. Formed in London during the late '80s, Renegade Soundwave applied the punk and industrial ethic to both dub and dancefloor electronica, in good company with fellow sound terrorists throughout the decade, from Cabaret Voltaire to Skinny Puppy and Meat Beat Manifesto. The trio of Gary Asquith, Danny Briottet and Carl Bonnie debuted on Rhythm King with the 1987 single "Kray Twins," and moved to Mute one year later for an EP, Biting My Nails. Though Renegade Soundwave spent two years recording material for an album, the release of Soundclash and In Dub within six months vindicated them somewhat. The seminal album RSW In Dub joined the dots in the emerging electronic, rave, dub and indie scenes of late 80s / early 90s. Cited as major influence on artists such as The Prodigy, Chemical Brothers and the Drum & Bass, Techno, Breakbeat and Trip Hop movements. "Probably a Robbery" (from Soundclash), made the British Top 40 early in 1990, though perhaps the band's most highly regarded track The Phantom has proved an enduring anthem from the rave era. The Phantom, Women Respond to Bass, Ozone Breakdown, Probably a Robbery,Biting My Nails and Renegade Soundwave were top five US Billboard Dance singles. Bonnie left in 1990, for a solo career. Asquith and Briottet spent several years in isolation before emerging in 1994 with the "Renegade Soundwave" single and the album How You Doin? During late 1994, after playing their first live date since their participation in 1991's "Mute Over America" tour, the duo released Brixton and The Next Chapter of Dub the following year. The compilation RSW 87-95 emerged in 1996.
Sites:
Wikipedia
Members:
Danny Briottet, Gary Asquith, Karl Bonnie
Variations:
Viewing All | Renegade Soundwave
R.S.W., RSW, Renegade Sound, Renegade Sound Wave, Renegade Soundware, Tenegide Soundwave, Versions Excursions Present

June 29, 2021
...with the bass as an ally, they moved the sound barriers further away, leaving a path for the next great bands to come...

December 2, 2017
One of best Electronic Samplers to come out of London in the late 80s. We all remember Renegade Theme,The Phantom and of course Thunder!. Which itself was introduced to me by DJ Sasha, the man himself one Saturday night.

February 15, 2017
Where it started with me. Bought Soundclash (Cassette) Attended their rocking gigs (Windsor/ Astoria) Dance music without the fruityness.
RSW where boss!

Perhaps the biggest influence on me musically out of my whole life, still love most all their shit, and been buying their shit since I before I could drive a car. I first heard Kray Twins on Snub TV. Snub Tv what a killer show.

March 20, 2009
Let's not f**k around here, these guys were resonsible for the breathtaking double a side called 'Ozone Breakdown/The Phanthom' which in itself was the best warehouse groove to come out of London in the whole of 1989 and done THE damage to all associated sound systems...I am thinking Dance 89' (Energy) and other Sunrise, Energy type parties at the time.

Long before the Internet, before relational databases, you could'nt just grab a label and look up a tune, you had to KNOW the tune and this one was well worth the trouble.

January 4, 2004
RSW was one a handfull of creative elements that carved out new sounds from the UK scene in early 90's. long before the jungle/D&B scenes, dust/chemical bros. and bigbeat, they were using heavy breaks and looped samples, as the main elements to the music. In Dub is up there as a top 10 LP for the 90's and is a true timeless classic - check it out!