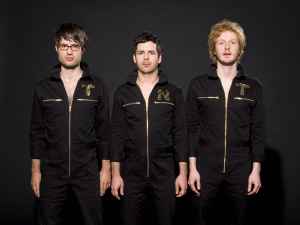 Profile:
Justus Koehlermann, Pascal und Cournal Kincade got to know each other on the 1999 edition of the Pleasure Strom Festival in Norwich. Their song 'Ratterbit' (other version than included on their first album) got massive airplay on the public austrian radio station FM4 in 2003. Their first record appeared 2005 on the Fabriques twin label Stereoalpine Records for which they were nominated for the Austrian Music Award 'Amadeus' - category Alternative.
Sites:
tntjackson.net, MySpace, Wikipedia
Variations:
Viewing All | TNT Jackson
TNTjackson