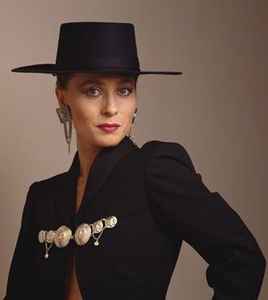 Real Name:
Marietta Waters
Profile:
Marietta Waters is a US-American vocalist of latin descent. She had a brief solo career in the mid-eighties when she released several singles and appeared on the "Top Gun" and "Fire & Ice" soundtracks under the stage name of Marietta and, for a short period, used the name Marietta Araiza for her work with Sérgio Mendes.

Ms. Waters has also written songs as well as recorded and toured with and for a diverse range of artists such as Berlin, Stevie Wonder, Giorgio Moroder, Cyndi Lauper, Ringo Starr, and Elton John, amongst others. In 2006 she released the "A Call From The Heart "CD, showcasing her Pop, Latin, Jazz, R&B and Gospel influences.