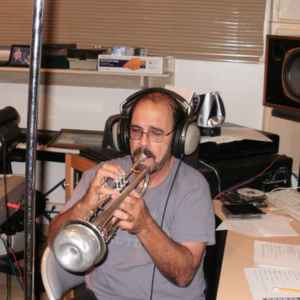 Real Name:
Gary E. Grant
Profile:
Trumpet player - composer - producer
He has been a sought after and featured soloist working out of Los Angeles since 1975 on jazz, pop and rock recordings as well as in blockbuster movie soundtracks, TV show scores and soundtracks and in commercials.

Gary E. Grant was born and raised in a musical family, (Mary Kay, Eben, Ernie) of which he received his early training from his father, Harry Grant. He attended North Texas State University before a two year tour with the famed Woody Herman band in which he performed as lead trumpet and featured soloist. Gary spent 3 years in Hawaii collaborating with a phenomenal group of musicians performing with his own big band and 7 piece ensemble.

In 1975, Gary moved to Los Angeles to become one of the most sought after musicians in the business. Almost 20 years later, he has accumulated an impressive list of recordings that include many top hits of the past three decades. Gary is also a part of the world famous "Jerry Hey" horn section.

As a featured soloist, Gary's rich and clear sound can be heard all over the world in many famous movie soundtracks. One standout in this genre is the live orchestra recording of the main title in the motion picture, The Bodyguard. Other recent solos in motion pictures include: Tin Cup, First Wives Club, Eraser, Forest Gump, Grumpier Old Men II and Judge Dredd. Gary can also be heard on the recent movie soundtracks of Flubber, Godzilla, Mulon, Contact, Space Jam, Men In Black, The Preacher's Wife, The LushLife, The Mirror Has Two Faces, Cats Don't Dance, Volcano and Hercules. Currently, Gary is recording soundtracks to new releases: Lethal Weapon 4, Parent Trap and Horse Whisper.