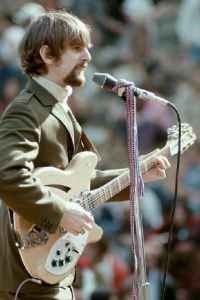 Until 1967 he went by the name Jim McGuinn professionally and personally. Then, influenced by the spiritual movement Subud which (according to statements McGuinn himself made in an interview for Rolling Stone) ascribes importance to "one's name vibrating with one's spirit", he legally changed his name to James Roger McGuinn and thereafter went by the name Roger McGuinn.

June 5, 2021
Byrdhouse, combination of Crowded House with Roger McGuinn, should exist as a joint project called "Byrdhouse", as released "Mr Tambourine Man" as a "joint" single on the Crowded House single, "I Feel Possessed/Mr Tambourine Man", with "Eight Miles High" and "So You Want To Be a Rock•N•Roll Star", recorded live in L.A. 7 April 1989, mixed by Kevin Sims.

March 21, 2019
See under REM(Unofficial Albums) - Roger,Bill,Mike and Pete : Remember the Byrds - REM with Roger McGuiinn in Concert at the Uptown Lounge, Athens, GA. 5/11/88