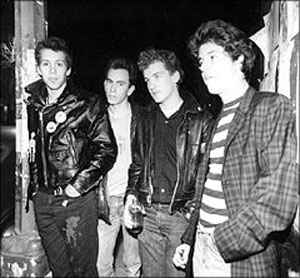 Profile:
The Teen Idles were a punk rock band formed in 1979 in Washington, DC, by Ian MacKaye (bass), Nathan Strejcek (vocals), Georgie Grindle (guitar), and Jeff Nelson (drums), all high school classmates. The band was born out of the demise of The Slinkees, which featured Grindle, Nelson, MacKaye, and vocalist Mark Sullivan (4), who broke up after Sullivan, a year older than the rest of the band, went to college.

The group played various shows around DC and, in the summer of 1980, travelled to California for 2 shows, getting an eye-full of Los Angeles burgeoning hardcore scene and importing a number of the scene's traits back to DC, including slamdancing. The Teen Idles proved to be influential to many of the younger punk fans in and around Washington DC, inspiring a new wave of bands who called themselves "harDCore".

In late 1980, the band broke up. This mainly due to tension between Grindle and Nelson. Grindle's born again Christian girlfriend disapproved of the band, causing him to question his participation, which brought him into conflict with Nelson, who was an atheist. Also adding to the mix was MacKaye's, who was the band's lyricist, dissatification with Strejeck's performances and his own desire to sing. Following their split, the band took money they had saved from their shows to issue an EP called "Minor Disturbance" on their own Dischord Records. Grindle would drop out of the music scene altogether. Strejcek would help Nelson and MacKaye with Dischord but was soon edged out by the other two, who were dissatisfied with his work ethic, especially after he left a box of Teen Idles records sitting on top of a hot car engine, rendering them unplayable. Nelson and MacKaye formed Minor Threat after the Teen Idles split while Strejcek formed Youth Brigade (2). Youth Brigade was short-lived and Strejcek soon bowed out of the scene altogether while Nelson and MacKaye continue to run Dischord to this day. The two have also participated in several acts over the years (although Nelson is largely retired from performing). In 1996, in honor of Dischord's 100th release, the label issued a Teen Idles demo on vinyl.
Sites:
dischord.com
Members:
Geordie Grindle, Ian MacKaye, Jeff Nelson, Nathan Strejcek
Variations:
Viewing All | The Teen Idles
Teen Idles