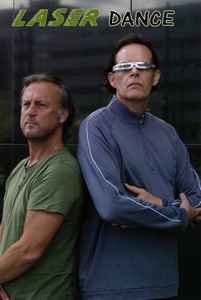 Profile:
Laserdance was started in 1981 by Erik van Vliet, the owner and founder of the Hotsound Records label, who also owned one of the most respected recordstores, located at the Pleinweg in Rotterdam.
The first release, also the first and biggest release of the Hotsound Records label, was "Laserdance", which Erik produced with the help of Fonny De Wulf. Inspired by a promo record in the UK, this release opened the door for many other Laserdance productions. To help him with this, Erik hired Michiel van der Kuy. Together they became a solid production team, where Michiel played the synths and Erik told how it should sound. But eventually they went their own ways, as many other musicians do in the industry. Now after 21 years Michiel van der Kuy and Erik van Vliet are together and back with brandnew Laserdance Hotsound Recordings Productions Force of Order is first album and hopefully many more to come
Sites:
Facebook, Wikipedia, spacesynth.net
Members:
Erik van Vliet, Julius Wijnmalen, Michiel Van Der Kuy, Rob van Eijk, Ruud van Es
Variations:
Viewing All | Laserdance
Laser Dance, Laserdance Orchestra, Lazer Dance

July 29, 2020
Some amazing melodies with these guys, they bridged a gap between mid 80's Italo / Euro Disco and computer game (Commodore 64 / Amiga) music.

Their music is rather unique, in that it sounds like typical Euro Disco (with the 4/4 rhythm) but the synths & melodies have a very sharp and clinical sound.

There are typically no vocals (and if there are, they are vocodered). This just lends to the overall "spacey" sound, hence the tag Spacesynth.

It's an 80's continuation of the classic late 70's Space Disco style, brought into the digital age.

Seems funny looking back, as most people will associate this sound with computer games more than discos.

But whether you listen to Laser Dance in your bedroom playing your Amiga or on the dancefloor of your local Spacesynth club (lucky you), the music is outstanding.

For me, their best work includes Power Run & Shotgun.
Reply Notify me 1 Helpful

Great band.
Not all the albums are superb but that's completely understandable.
I produce Synth-Pop too myself but I'm more Techno, Trance and Acid orientated than Laserdance is.
Many thanks for all your great music and keep it up no matter what!
Best wishes ,
Fils.

February 26, 2011
Laserdance defines spacesynth. They are everything you could want in a classic synth group. The quality of the music slowly decreased over time, their most recent CD not holding up to the old ones.
Reply  See 1 reply Notify me 5 Helpful

December 24, 2010
If you know space-disco or synth-dance you also know Laserdance. Laserdance is a real legend on this genre! Can you imagine 80's disco without Laserdance? No you can't. This is just perfect synthesizer sound. However, the return on 2000 did not work, but who cares? We care the earlier albums from the past and they still sound like a diamond. I have all albums on CD, but still I like to listen to "Discovery Trip" on LP! It is space disco's at its best!
Reply Notify me 5 Helpful