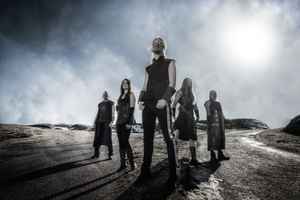 Ensiferum's black/death/folk metal hybrid was first born in 1995 when Markus Toivonen (guitar), Sauli Savolainen (bass) and Kimmo Miettinen (drums) got together to form an innovative band. The following year, Jari Mäenpää joined as a vocalist (and second guitarist) and the first self-titled demo was released.

Before releasing their second demo tape in 1999, Jukka-Pekka Miettinen replaced Sauli Savolainen on bass and ex-Arthemesia drummer Oliver Fokin swapped positions with Kimmo Miettinen. The band continued playing and recorded a third demo, "Hero in a Dream", which was noticed by underground (and non) magazines which allowed the band to gain popularity and sign a deal with Spinefarm Records.

Finally, Meiju Enho joined as keyboard player for the band and they were now able to record their epic, self-titled debut "Ensiferum" in 2001.

January 1, 2019
This is my favorite band with beautiful music. I clearly remember that shock I experienced when listened their first two albums back in 2004.

Can anyone tell me which album was the "Mä näitä polkuja tallaan" cover on, Im not talking about the live version on the dvd, im talking about this: https://www.youtube.com/watchv=UD5aSXXEMuI Even though there is a picture of the dvd art on the video it doesnt appear on said dvd.So if anyone has any idea where i could get this version I really prefer this to the dvd

February 1, 2015
Searching for the japanese pressing of Ensiferum's self-titled album, which contains a bonus cover track of Judas Priest's song "Breaking the Law". I will be willing to pay at least 100 Euros/115 USD for a copy of the japanese pressing. If anyone has this version of the album and would like to sell it, please send me a message and i'm sure we can work something out, thanks.
See 1 reply