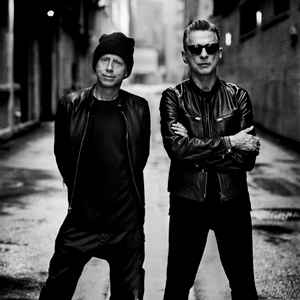 Depeche Mode released their debut record "Speak & Spell," in 1981, bringing them into the British new-wave scene. Soon after the release of the album, Clarke decided to quit the band, leaving them to record their next album, 1982's "A Broken Frame," as a trio. Gore took over lead songwriting duties and, later in 1982, Alan Wilder (keyboards, drums, occasional songwriter) officially joined the band to fill Clarke's spot, thus establishing a line-up that would continue for the next thirteen years.

1983's groundbreaking "Construction Time Again," and 1984's "Some Great Reward," gained the band extensive popularity in the US. The subsequent releases of 1986's "Black Celebration," and 1987's "Music for the Masses," established them as a dominant force on the mainstream electronic music scene. A highlight of this era was the band's concert at the Pasadena Rose Bowl, titled "101," where they drew a crowd in excess of 60,000 people. The latter end of the US tour was recorded and released on VHS video, and was titled "101." The show itself was recorded and released as a double live album, and carried the same title.

In the new decade, Depeche Mode released 1990's "Violator," which was a massive mainstream success. The subsequent album, 1993's "Songs of Faith and Devotion," and the supporting "Devotional Tour," exacerbated tensions within the band to the point where Alan Wilder quit in 1995, leading to intense media and fan speculation that the band would split.

Now a trio once again, the band released "Ultra," in 1997. This album was recorded during the height of Dave Gahan's near-fatal drug abuse, Martin Gore's alcoholism and seizures, along with Andrew Fletcher's bout with serious depression. For these reasons, their no worldwide tour for this album. In 1998, the band released "The Singles 81 > 85," which was a re-issue of 1985's "The Singles 81 → 85." The latter release contained "Photographic (Some Bizarre Version) & "Just Can't Get Enough (Schizo Remix)."

The release of 2001's "Exciter," confirmed Depeche Mode's willingness to remain together, the subsequent, and very successful. The "Exciter Tour," was their first tour in support of an original album since 1993. Again, the band did tour in 1998 to support the aforementioned "The Singles 86–98," compilation albums.

Depeche Mode have had fifty songs in the UK Singles Chart and thirteen top 10 albums in the UK charts, two of which debuted at No. 1. Depeche Mode have to this day sold over 100 million records worldwide, making them one of the most commercially successful electronic bands and one of the world's best-selling music artists. Q magazine calls Depeche Mode "the most popular electronic band the world has ever known," and included the band in the list of the "50 Bands That Changed the World!" Depeche Mode also rank number 98 on VH1's "100 Greatest Artists Of All Time."

DM's legacy is now a joke, as are they, with their $5,000 tickets for the horrible "concerts" they now have, singing Mississippi Delta Blues. Depeche Mode existed from 1981 to 1990. Nine years. The past 32 have been suck, and will only get worse.

September 4, 2022
Wilder was the unsung hero of the outfit. DM’s music since his departure has been terrible, diminishing their legacy.
See 5 replies

June 11, 2022
DM has one of the biggest lists of lists on the bottom of this page... that is the real appreciation of the band's input in world's electronic music legacy

May 28, 2022
Thank you Fletch,
you and your band mates wrote the soundtrack to my life.
Will carry you in my heart forever!

May 27, 2022
Depeche Mode has been with me for as long as I've had music in my soul. For as long as music has been my constant for thought and reflection and booty shakin'. Sure, my music tastes have changed every decade or so but DM's always been there. Aside from Vince Clarke leaving after the first album and Alan Wilder leaving after Songs of Faith and Devotion the mainstays David Gahan, Martin Gore and the late Andrew Fletcher have been churning out some great stuff. Losing Fletch is a big deal. He was the instrumentalist. He was the "straight man" of the band that rarely took the spotlight and even less: praise for his work. For me, he was an essential part of the group and I can't see DM existing without him. It would be great if Wilder or even Clarke came back into the fold but that is highly unlikely. After a long career I'd like to see the boys retire and enjoy their lives. They don't owe the public anything. Fletch passing is a hint that they should realize that life is fleeting and stepping out of the business now might be the right thing to do.

May 26, 2022
May you rest in peace dear Fletch. I will miss your handclapping.
My thoughts goes out to friends and family.