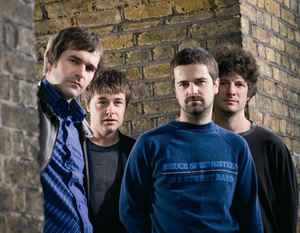 Profile:
London-based four-piece indie-pop band formed in 1993. Very successful at the peak of Britpop in the mid-90's scoring a debut number one album, knocking Oasis (2)'s (What's The Story) Morning Glory? from the top spot. The Bluetones just missed out on a number one single with "Slight Return" (arguably their most famous song), being kept away by Babylon Zoo's "Spaceman" (featured in a Levi's TV ad). Scott joked that he actually bought a copy of "Spaceman".

In their early days they shared a house in Hounslow with Dodgy.

They decided to call it a day in 2011 with a farewell tour. Mark continued to record and tour solo material. The band reformed for an anniversary tour in 2015/6 and also re-released two demos (including Slight Return) on a limited 7" vinyl for the occasion.