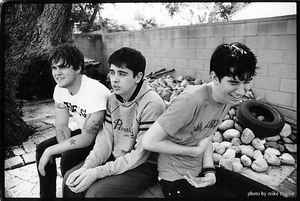 Profile:
Osker was a Los Angeles melodic punk rock band who formed in 1998 and split in February 2002, ultimately due to the departure of their drummer. The line up originally consisted of Devon Williams (2) on vocals and guitar and Dave Benitez on bass. They never had a full time drummer, however Phil Drazic was the longest standing.
Sites:
Wikipedia
Members:
Dave Benitez, Devon Williams (2), Phil Drazic