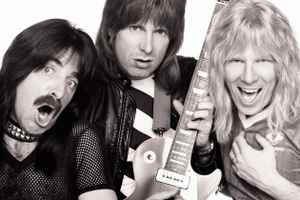 Real Name:
Spın̈al Tap
Profile:
Parody band. Their name is stylized as Spın̈al Tap, with a dotless i, and a heavy metal umlaut over the n.

John "Stumpy" Pepys (DRUMMER)
An original member of the Thamesmen and Spinal Tap, Stumpy died in a "bizarre gardening accident." When asked about it, Nigel says, "It was really one of those things the authorities said, 'Well, best leave it unsolved.'"

Eric "Stumpy Joe" Childs (DRUMMER)
Childs was the band's second drummer, replacing gardening victim Stumpy Pepys. He died from choking on vomit, which, as the band helpfully points out, was not his own. Exactly whose vomit was never determined by the police. As Nigel so aptly put it, "You can't dust for vomit."

Prompts the question: On what day did the Lord create Spinal Tap? And couldn't He have rested on that day too?