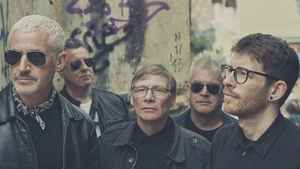 Profile:
Sad Lovers & Giants are a rock band from Watford, England who formed in 1980. Their sound blends post-punk, atmospheric keyboards and psychedelia. Following their debut EP ‘Cle’ and the ‘Colourless Dream’ single, both issued in 1981, they released two studio albums, Epic Garden Music (1982) and Feeding the Flame (1983) before splitting in 1983.
During this initial period they recorded a John Peel Session for the BBC and a live concert for the Dutch Radio Hilversum station in 1983 which was subsequently released as the album Total Sound in 1986.
After the split they returned in 1987 with a new line up and released ‘The Mirror Test’ album that year.
The band operates as a collective.

This new wave pop band is cult.
Why ?
The musicians use the whole sound arsenal of the epoque (choruses, echoes, reverbs, synths) and are not particularly inovant.
What makes the difference ?
The sound : pretty unique, crystal clear, refreshing as pure water, maybe a bit underproduced.
The ability to compose epic melodies that catch your ears immediately.
The work on the arrangements and harmonics mixes between saxophone, guitars and keyboards.
The constant impression of optimism and enthousiasm of the music, when [Invalid Artist] and Simple Minds are heavy, Sad lovers keeps lightness creating little happy moods.