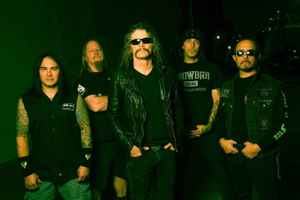 The band known for rejecting several names, which includes "Virgin Killer", this new band finally settled on "Overkill", naming themselves after a Motörhead album.
Overkill were formed in New Jersey when a previous D.D. Verni/Rat Skates (real names: Carlos Verni and Lee Kundrat - the stage names were tributes to favourite punk bands, the Ramones featuring Dee Dee Ramone, and the Damned, featuring Rat Scabies... Bobby Blitz was taken from The Dead Boys' Johnny Blitz!) project, a punk band called The Lubricunts, broke up in 1980. (There's a picture of the Lubricunts demo cover in the Wrecking Your Neck liner notes.) D.D. quickly wanted to form a new band, so he put out an ad which was answered by guitarist Robert Pisarek (who came up with the name Overkill), but he was quickly replaced by Dan Spitz and Anthony Ammendolo.

Early covers (especially those done under the Virgin Killer name in the very very early days) were punk songs for the most part, including selections by the Ramones, and The Dead Boys. By 1980, they had recruited two guitarists (names forgotten over time) and the setlist included songs by Motorhead ("Overkill", half of the Ace of Spades album, and others), Judas Priest ("Tyrant" was their closer for a while), and later Iron Maiden and Riot, as well as a smattering of punk covers, which were played with extra distortion, intensity, and concentration on riffs.

In 1981, guitarists Dan Spitz (later of Anthrax) and Anthony Ammendolo left the band and Rich Conte entered with Mike Sherry. At this point, they started writing originals, including "Grave Robbers", "Raise the Dead", "Overkill", and "Unleash the Beast Within". More originals would follow, including "Rotten to the Core". Somewhere around this time Rich and Dan left and Bobby entered with Joe somebody on guitars. The band became a staple at New York and New Jersey clubs around 1982, and soon Bobby lived up to his "Blitz" nickname, earning an ejection from the band for a few days in 1983!

Around this time, the fluorescent green logo was adopted - it was specifically chosen to stand out on a poster with lots of red logos of other bands on the bill.

The lineup would stay consistent until 1987, when "Rat" Skates left the band. He was replaced by Mark Archibole for a few gigs, and then on a permanent basis Sid Falck, previously of Paul Di'anno's Battlezone. (Bobby Blitz once said that the only former member he misses is co-founder Rat Skates.) Then, in 1990, Bobby G. left and was replaced by Rob Cannavino and Merritt Gant (Faith or Fear).

This lineup lasted until 1992, when Tim Mallare came in on drums. Rob and Merritt both left the band in 1995 (Rob became a motorcycle racer, and Merritt formed several other bands), being replaced by Joe Comeau (Liege Lord) and Sebastian Marino. Joe left in 1999 to become the vocalist for Annihilator, and the Coverkill album was recorded with new guitarist Dave Linsk. Sebastian left to spend more time with family, so Linsk played all the guitar parts on 2000's Bloodletting album, and Derek Tailor joined for the subsequent tour, and was also featured on Killbox 13. Tim Mallare left Overkill on his own accord after 14 years with the band in 2005.