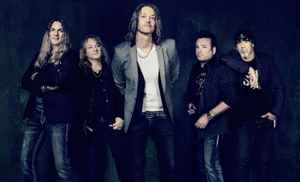 Profile:
Gotthard is a Swiss hard rock band founded in Lugano by Steve Lee and Leo Leoni. Their last eleven albums have all reached number 1 in the Swiss album charts, making them one of the most successful Swiss acts ever. With 2 million albums sold, they managed to get multi-platinum awards in different parts of the world. The band takes its name from the Saint-Gotthard Massif.

Singer Steve Lee died in a motorcycle accident on October 5, 2010.