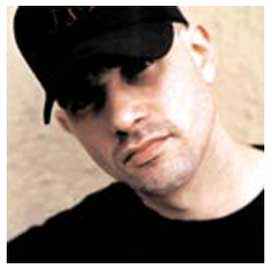 started DJing in Brooklyn NYC after working for 4 months at Apexton Records, in the pressing plant and in A&R for their label, Underworld Records.

Big break in his career was when he became a DJ at "Energy" (The Eclipse) raves in the UK.

"Frankie Bones is the most visible DJ and taste-maker of New York's independent techno scene during the 1980s and '90s, both through his nation-trotting club appearances and frenetic mix-album schedule (which approaches three per year). After five years of DJ appearances, Bones began producing as well in 1987, with as Musto & Bones. Their stellar remixes and tracks for Nu Groove Records made it the home of some of New York's hottest contemporary productions. In 1990, the pair released an album for RCA named The Future Is Ours, and the single "All I Want to Do Is Get Away" became a huge hit on dancefloors. Though he separated from soon after their LP, Bones' success gave him entry into the world of international DJing during the early '90s, and his remix work for and others led to a reputation as one of the preeminent house godfathers. He released almost a dozen CD's during the mid-to-late-'90s, including multiple volumes in the mix-album series Factory and Computer Controlled as well as his own production work on the 1998 house chronicle Technolo-G. These were followed a year later with a slew of EPs and singles from the New York native. Taking a more commercial path from his independent label Sonic Groove, Bones released the mix CD You Know My Name on Moonshine in November of 2000; a handful of other mix albums, along with a couple production-oriented projects, followed during the next several years. He has also recorded mixes for System, Instinct, and 611. His brother is also a high-profile DJ and producer." - John Bush, Rovi
Sites:
sonicgroove.com, Bandcamp, bandsintown.com, Facebook, Facebook, instagram.com, SoundCloud, frankiebones.tumblr.com, Twitter, YouTube, Wikipedia, hearthis.at
Aliases:
Bone-1, Bonesbreaks, Escape From Brooklyn, Frankie Goes To Brooklyn, Frankie Mitchell, Ghettoblaster, Lake Eerie, The Break Boys, Tribal Rhythm
Variations:
Viewing All | Frankie Bones
"A Brother Called Bones", "Bones", 'Bones', Bones, D.J. Frankie Bones, DJ Frankie Bones, F. "Bones", F. Bones, Frank Bones, Frankie "Bones", Frankie ''Bones'', Frankie 'Bones', FrankieBones, Frankye "Bones", Frankye Bones, Funkie Bones

May 12, 2021
Frankie Bones gets a flight over to here the UK at a perfect time of total uncertainty within the UK... 1988 he produced a breakbeat track https://www.youtube.com/watch?v=Zj0wR-k9aLU&t=4s
BONESBREAKS BACARDI 151 BEATS.... Is this the first real breakbeat that the UK heard and influenced them to start the sound of hardcore....? In some ways yes in the context of Jungle Funk Breakbeat by 'In The Jungle Groove] James Brown... Pills were here and it scared the weed-smoking and alcohol community at first (levels of history here) especially the UK Hip Hop community.. Suddenly what we thought as a movement that could properly publicize the untruths suddenly got flooded with ecstasy unrealities... Due to certain difficulties with my family at 16, I decided to try out this 'rave'? Now I was a hardcore B-Boy Hip Hopper since 81 (79 Rappers Delight never impressed me) and then suddenly I experience a shining of ecstasy on the dancefloors... Black white gypsy homeless inner city or the carrot crunchy side were suddenly in one zone... Ecstasy....
Breakbeats to other music without the rap made some sort of sense... Hip Hop in the US was getting either angry or stoned and within the UK we were stoned and angry to ...But this wonder drug suddenly created love and peace and some bad returns to...

Anyway back to this particular track... Breakbeat dreams of a further future beyond that... ;)

Most vinyl DJ's in the know with time under their belt have Bones records in their bag. Tracks, edits, & RMX's with his name that get the dance floor moving. Some of his live mix tapes/cd releases are the best around if you like high energy. One thing is for sure his skills can't be denied! LEGEND..In the 90's he played everywhere, and I couldn't understand his recent loss of popularity & bookings in the 2000's. I actually prefer his techno/house stuff over the breakbeat stuff he released, but that is just me. I sometimes wondered if that is kind of what isolated him in the end. Sometimes the breakbeat crowd can be very boxed in as a genre(meaning Breaks DJ's don't really care for Techno or House styles much) I personally like all types of music, but break beat parties only play Broken beat music & that style has loss popularity too. Anyway, Weather it was straight beat or broken beat it was high quality releases from Frankie Bones non the less. Not what is around now days... People today release tracks that are not even mastered or mixed right. It's a shame! Hope to see Bones return to the stage again. PLUR

February 24, 2016
I appreciate all the comments below. Somewhere in the past five years I got steamrolled by an onslaught of new talent which has turned this scene into a giant global phenomenon. But it's not over yet. Prepare for the next phase of this operation. New things are in the works.
See 5 replies

May 12, 2010
seen , Frankie Bones is the originator of the North American rave scene, the man that started it all, the greatest, the be all and end all as far as I'm concerned , the producer AND the DJ that got me into this music and STILL the greatest 20 years after I first heard his shit. long live Frankie Bones !!!!!!!!!!!!!

March 1, 2010
How is there not a review for this man? Thats like not having a review for Babe Ruth! This man is one of new yorks greats and is purely legendary. He is the godfather of the rave scene! From breakbeat to acid, from hip house to techno there is no denying this mans contributions to the techno scene! Not many can boast his resume! One of the few to have underground and commercial success and rightfully so!
From classics like bonebreaks to the hits of his collaberation with Lenny Dee (Looney Tunes) to the founder of one of the great labels (Sonic Groove) and the many CLASS mixed CDs which he has blessed us with over the years! Words cant express this man in simplistic form! He is a legend with a true love for the music! Frankie is techno! I wish we had more like him with that fire! Instead we are saturated with watered down no less then crappy acts such as Deadmau5 and all clones like him...... You want honest techno? Then why settle for imatations when you can have the real thing? Thank you Mr. Bones! I don't know what life would be like what out you!
See 1 reply