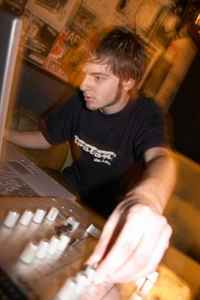 Real Name:
Danny Kreutzfeldt
Profile:
An electronic music producer located in Aarhus, Denmark when his first solo releases were released by Thinner in 2002. Over the following years Danny Kreutzfeldt covered a wide range of styles from deep ambient dub to vast harshnoise soundscapes and went on to perform, collaborate and release under numerous monikers before discontinuing most of these activities around 2008. As of May 2010, sporadic solo productions are still occasionally made public as Periskop.

Apart from releases under his own name, sgnl_fltr, Fallingapparatus, Sectorchestra and Periskop are all known to have been used around the middle of the decade for the different aspects of Kreutzfeldt’s numerous and versatile solo productions. Under his own name alone Danny Kreutzfeldt managed to release four albums, six EPs, a remix album and several remix and compilation contributions during this period of hyper productivity.

The two debuting netlabel releases from 2002, Protolith EP and Furtherspace EP, mark the beginning of his work into deep industrial ambient dub, which was continued and refined on Counterperipheral (2004) and to some extent Closelands (2006) - before turning to a fully fledged drone based approach to dark ambient on the desperately bleak and highly complex Numberground from 2007.

Along side this development into deep dark soundscapes, Kreutzfeldt also used his own name to display and perform a series of dense and atmospheric harshnoise productions at concerts and sound art exhibitions. These were eventually released on a handful of successful discs. With Noiseworks 1 being hailed as one of the best Danish electronic music releases of 2004 by a Danish music magazine, and the four part EP series The Ruptures now being sought after collectibles.