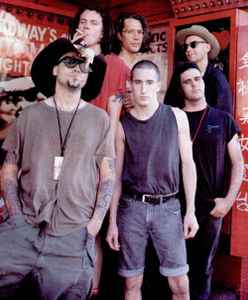 Profile:
1000 Homo DJs was a Ministry side-project that featured Jello Biafra (of Dead Kennedys and Lard) and Trent Reznor (Nine Inch Nails). According to legend, the group's name was suggested by Wax Trax! Records co-founder Jim Nash (2) who, in addressing Al Jourgensen's concern over a remix, reassured Jourgensen that only "a thousand homo DJs would hear it" and the name stuck.

The group's first single, Apathy (1988), contains "Apathy" and "Better Ways", which were both originally intended for Ministry's album "The Land Of Rape And Honey", but ended up being rejected for not fitting in with the more aggressive sound of that album. Their second single, Supernaut (1990), contains the title track "Supernaut" (a Black Sabbath cover) and "Hey Asshole", which were both recorded specifically for the project. The cover art was designed to closely resemble Black Sabbath's "Master of Reality" album cover. A subsequent compilation called "Supernaut" (with the same cover artwork) compiles all four tracks from both singles and was available on CD and cassette (and on vinyl in the UK.) The track "Supernaut" was originally recorded with lead vocals by Trent Reznor, but could not be released in 1990 due to legal problems with Reznor's label TVT Records. The story goes that Al distorted the vocals and claimed them as his own, although he, himself, has signaled that they are actually his own vocals. Years later, the original Reznor vocal version was released on the Wax Trax! Black Box compilation.
Sites:
Wikipedia
Members:
Al Jourgensen, Eric Boucher, Jeff Ward, Mike Scaccia, Paul Barker, Trent Reznor, William Rieflin
Variations:
Viewing All | 1000 Homo DJs
1,000 Homo DJ's, 1.000 Homo DJ's, 1000 Homo DJ's, 1000 Homo DJs As Seen On TV